I want a supply of energy that can work when the grid is down.

Here’s an interesting possibility from Spinray.

You buy their solar panels and plug the electrical male plug into an outlet and it feeds power to the grid, reducing your utility bill.

With the solar panel and micro inverter combination, the power goes to the grid. But if the grid goes down, what happens?

You need a storage device like the Humless Sentinal. 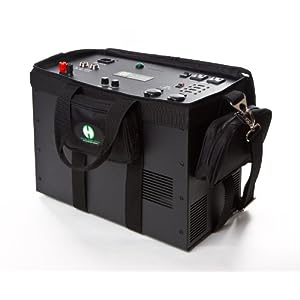 The Humless Sentinel is a silent, clean, safe, and portable lithium based silent generator that can be charged from a regular AC wall outlet, or, it can capture and store energy from solar panels, a hand crank, windmill or almost any other 12VDC power source. The Humless Sentinel stores the captured power in a state of the art Lithium Battery pack that can be taken with you and used whenever or where ever you might need it. The Humless Sentinel has two 110VAC outlets, two 12VDC outlets and four USB outlets to allow you to easily power whatever appliances you need without the need for any inverters or adapters. Whether you need to power a fridge, laptop computer, lights during an emergency or power outage, or whether you want to watch TV in the woods, the Humless Sentinel will give you the power when you need it. With the whole package weighing in at 40 lbs, it’s portable enough to take wherever you want to go. Without any noise, gas or harmful emissions, the Humless Sentinel provides power on demand that is quiet and safe enough to use inside your home, car or even your tent. Capturing power with or using power from your Humless Sentinel couldn’t be easier- just plug it in and switch it on! With a 10 year battery shelf life and a rating of over 2,000 charges and a lithium battery pack that can sit for over a year without needing to be charged (we recommend charging once every 6 months), the Humless Sentinel will store well in a closet and always be ready to power appliances.

My sister, who lives in Richmond, recently had their power knocked out for 7 days from a hurricane (downed power lines from falling trees). In this scenario, they would use the Humless Sentinel (fully charged from being plugged into the grid) to power the most important appliances (perhaps a freezer full of food) until it ran out of power. Then they would plug the power cord from the solar panels into the Humless Sentinel to recharge. With some cooperation from the sun, perhaps they could keep their freezer from defrosting for many days.

The Spinray solar panels cost $1000 each. My nephew James (an engineer) estimated that it would take about 7 years for the solar panels to pay to break even at $1000 each, at today’s energy prices. (Hopefully, solar panels and micro-inverters can see that same kind of increase in power and decrease in cost that have boosted personal computer technology over the last 30 years.)

Some sun must shine for solar panels to work.