At 2:20am this morning I was awakened by a long coyote howl from our back yard. A few seconds later I heard the acknowledging howl from far off. Coyote packs send out scouts to find food and relay the information over long distances. If food is found – like an injured deer or meat in the garbage can – the finder calls the pack in.

These are smart animals sharpened by survival of the fittest and by adapting to nature and civilization. Unlucky cats and small dogs who are out all night are especially vulnerable. Be safe with your pets. I heard a big flock of sandhill cranes flying over on the afternoon of Feb 16, headed north. When I went outside and saw them, it looked like about 400.

I've been hearing them go over almost every day through Feb 21.

I hope this means that this very cold winter is over

Big flocks of Sandhill Cranes are flying over, heading south for the winter. Apparently there's a thermal rising here because they are coming in at a lower elevation, catching the thermal, and riding it up in a circle until they are several hundred feet higher. Then they head south, all the while singing their beautiful song.

I have yet to determine how the date of their migrations north and south correlates with the severity of the winter. Eight years ago today Ann brought this kitten home. She was the sister of Blue Star, who had been with us two weeks. She wasn't as pretty as Blue – she had huge feet and ears. We named her Mist.

She grew into those feet and ears and became a beautiful specimen of strength and confidence. We started calling her Missy. She had to be outside all day, consenting to be pulled in at dusk only at our insistence.

Recently we became aware of her feats of boldness and courage when she was out in the woods and fields, and we started calling her the Siamese Wolverine. We are still grieving her June 1 death at the hands of an evil human. He didn't know about the curse of the wolverine, but he will find out.

P.S. Here's the story of the terrible day: Missy the Siamese Wolverine – RIP

Here are some other dates that I've seen sandhill cranes over our home in Woodstock, GA:

Can you see the cat? That’s our Sweetie Wildcat playing in the leaves. I was in the garden on Sunday, Nov 25, removing the last of the tomato plants. We had had our first hard frost on Saturday night and the tomato plants had wilted. As I worked, I heard the sweet sound of Sandhill Cranes chortling and saw several V-shaped flocks heading south.

On Monday, Nov 26, I heard a flock nearby. I went into our front yard and a flock was over our home, circling in an updraft, using the solar heated air to gain elevation without having to climb using their own power.

I look forward to seeing them twice a year. I have documented their migrations in the blog for about 10 years. The Sandhill Cranes seem to be able to predict the duration of winter. When they pass by heading south earlier than usual, it means winter starts early. When the are flying north early, it means winter is ending early. I value their foresight. 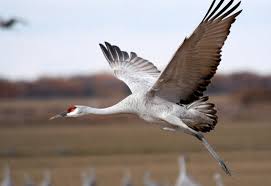 I was relaxing in our spa on the porch under our deck after a long day. The spa jets were cranked up to high — I was trying to blast away the stress of work and the aches of the body. Suddenly the motion-sensing floodlights that scan our back yard clicked on. Earlier that day Ann had thrown some large chunks of stale homemade bread into the yard to feed the critters. A large “opossum” had smelled the lure and was chomping on a tasty piece of bread.

When the floodlights flashed on, the possum looked for a better place to dine. He ran behind the corner of the porch, where he was out of the light. Coincidentally, the corner of the porch was about four feet from where I was sitting in the spa. I watched the possum munching on the bread. He was a big, well-fed marsupial, about the size of a large cat. Since he didn’t have any water to drink with his hunk of bread and he didn’t want to get choked, he really had to chew his food well. Fortunately, he had some big jaws and strong teeth behind that long nose and legendary grin, well suited for chewing. As I sat in the spa and watched him enjoying his meal, I felt lucky to witness such a sight at such close proximity. For people who have house possums (my sister Billie, for instance) this is not a rare sight, but it was a real treat for me.

Watching those teethy jaws chomping on the bread, I flashed back many years to another close encounter. Two friends and I had been to a New Years Eve party at the Stanley residence in Virginia. At about 2am we left the party, in high spirits. I was driving, Scott was in the passenger seat, and Dee was in the back seat. As we were winding down the long driveway, a possum scurried across the road. Scott yelled to stop, so I pointed the lights in the direction of the critter and hit the brakes. Scott bailed out of the car and ran after the possum. Dee and I couldn’t believe what happened next – the possum started climbing a tree and Scott grabbed it by the tail and pulled it off the tree! Dee and I were rolling around in the car laughing at Scott’s bold move and the possum’s misfortune. Scott held the possum out as far as he could from his body and gave it a shake as it tried to curl up to bite him. He started walking back to the car.

Realizing what Scott was going to do, I yelled at Dee to lock the car door. Dee was laughing so hard that he didn’t hear me. I yelled again, desperate because Scott was very close to the car. Dee finally came to his senses and locked the door, just before Scott grabbed the door to open it. I was enjoying myself greatly but I didn’t see how having an enraged possum tossed into the car with us would have increased the fun. Scott walked to the front of the car and held the possum in the headlights. Very agitated, the possum was snapping his jaws and saliva was dripping out of his mouth. Every few seconds he would try to use his tail to curl up so he could bite his tormentor, but Scott would give him a shake and gravity would prevail. After a moment, Scott put the possum down, it ran off, and we were goin' down the road feelin' good.